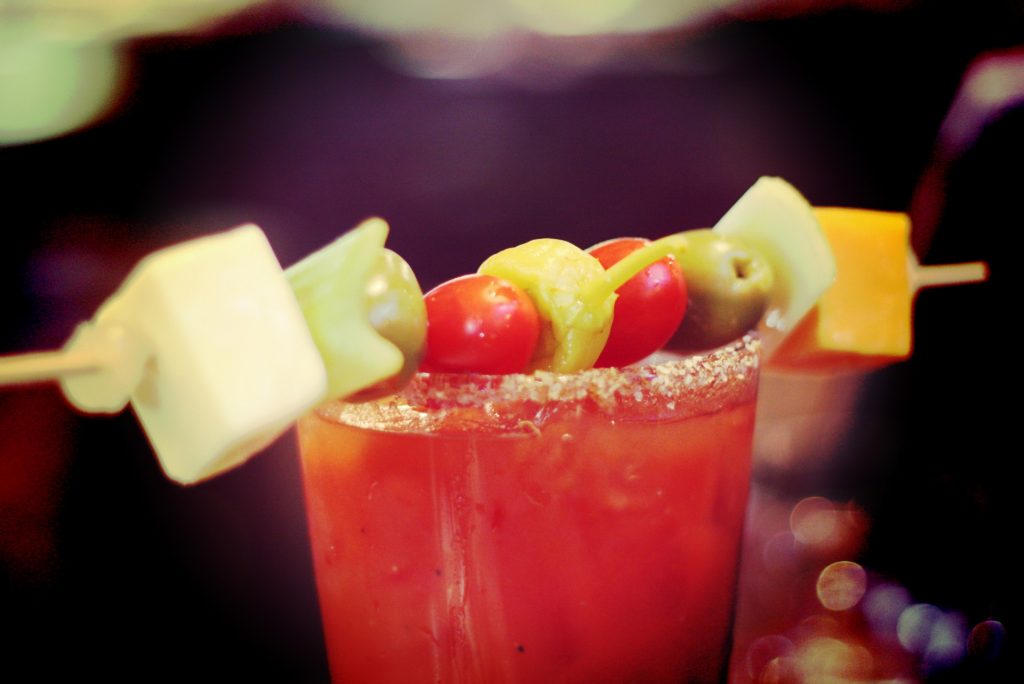 The Bloody Mary had simple and humble beginnings: half vodka and half tomato juice, with no known garnish. Like many classic cocktails, its origins are unclear. One version puts its invention at the New York Bar in Paris (later Harry’s New York Bar) in 1921, by bartender Fernand Petiot. Another story says it was first concocted at Manhattan’s 21 Club for comedian George Jessel. Petiot later claimed to have layered Worcestershire sauce, black and cayenne pepper, and a dash of lemon juice in a cocktail shaker, giving birth to the modern version of the drink.

No one knows when the insanity started—only that, like most obsessions, it grew gradually and inexorably. First there was a stalk of celery, then some green olives. When a large shrimp was added to the cocktail, many drinkers thought it was the height of excess. Little did we know what was to come.

Today, the nuclear arms race has been replaced by the obsession of adding as many elaborate garnishes as possible to the Bloody Mary. Bacon is obligatory, of course. Cheeseburgers are popular. Many consider the drink to be incomplete without a beer served alongside it. As the garnishes multiply and become larger, the highball glass shrinks by comparison and becomes obsolete. Today’s Bloody Mary is actually a meal for one or more people, created in an atmosphere that resembles an ice-carving competition.

Consider a few of many examples:

At Freedman’s BBQ in Austin, you can order a Holy Mary. It consists of a full quart of Forty Creek whiskey and is topped by a half pound of smoked brisket, plus sausage and spare ribs—a steal at $24.

Not to be outdone, The Nook (which claims to serve “the best adult beverages in Atlanta”) serves The Bloody Best in a 32-ounce glass. It contains six ounces of Absolut Peppar vodka, pepperoncini, blue cheese stuffed olives, tots, steak, a slice of toast, bacon and a hard-boiled egg ($22). You can opt to drink it through a beef straw.

Got the munchies? Head to Sobelman’s Pub in Wisconsin (five locations, with the original located in Milwaukee), one of the early instigators of the trend. There you can order a Bloody Beast ($50), made with Tito’s Vodka and presented in a gallon-sized jar and containing bacon-wrapped jalapeno cheese balls and a Colby Jack cheeseburger slider on a skewer, along with all the standard garnishes. It comes with a Coronita on the side, in case you get thirsty. And yes: it’s topped with an entire fried chicken. We’ve come a long way from Harry’s New York Bar.

Mark Spivak is the author of Iconic Spirits: An Intoxicating History (Lyons Press, 2012) and Moonshine Nation (Lyons Press, 2014); his first novel, Friend of the Devil, is available from Black Opal Books. For more information, go to amazon.com.